Elias Crespin belongs to the Kinetic Art movement of Latin America and has established an international name for himself through the ingenious beauty of his electrokinetic mobiles. His exhibition at Sicardi | Ayers | Bacino showcases an ensemble of works produced between 2010 and 2020, illustrating the various stages of his artistic evolution.

Crespin’s mobiles, based on repeated geometric elements like squares, circles, dots and lines, unfurl in space in rhythmic sequences that respond to mathematical algorithms. The programming is sophisticated and extremely precise and constitutes the culmination of years of research since Crespin’s days as an engineer at the turn of the millennium. After graduating from the Universidad Central de Venezuela in Caracas, he worked on conceiving specialist software programs before applying his knowledge to the field of art. The family context he grew up in also played a role in this change of career: his grandmother was the artist Gego (1912-94), renowned for her works in metal mesh. In Caracas – where he lived until moving to Paris in 2008 – Elias Crespin got to know such giants of Kinetic Art as Otero and Soto, whose virtual cubes he decided to set into movement.

Crespin’s mobiles, suspended in the air by invisible threads, are imbued with a rhythm like that of breathing. They reveal themselves to the viewer little by little, without any mechanical linearity but with a variety of surprising effects. The ultra-minimalist Linea Copper (2016) is a linear structure that seems affected by a phenomenon of infinite articulation and dislocation. The dematerialized Tetralineados Transparente​(2010) catch the eye through their projected shadows. The gently ascending and descending movement of Circuconcéntricos Alu Rouge-50 (2018) evokes a living world; the viewer is hypnotized by its soothing  concentric construction.

In La Danza de las Catenarias (2019), Crespin explores a world of curves and woollen thread, whose fluid and vibrant aesthetics starkly contrast with the angular mechanics of 12 Cubos en Línea Bleu​ (2020). The latter’s volumetric configuration creates long, orderly perspectives that give rise to complex geometric structures which, when they break up, defy description. The regular grid mesh of 4Net Inox Quadra (2013) seems to be blown invisibly from convex to concave, threatening to burst apart at any second.

These unpredictable metamorphoses bear witness to Crespin’s endless imagination, underlined by his subtle handling of the aesthetic qualities of his materials: the transparent or colored luminosity of Plexiglas; the graphic finesse of metal; the contrast between gleaming metal and the matt nature of wool; the impact of colors on a work’s definition….

The mechanics governing his mobiles remain invisible, with their spatial configuration emerging little by little – drawn out over time, not speeded up. Crespin’s programmatic art favors slowness over speed: these works need to be observed at leisure. They create an impression of slowing down, even of time being suspended, that lets the viewer’s imagination run riot. The passage in Crespin’s mobiles from order to chaos – depending on whether his forms dilate, diffract or return to the center – reminds us that nothing in the universe is immobile. E pur si muove! (‘And yet it moves!’) as Galileo famously put it back in 1633.

Crespin’s work invites us to reflect on the fundamental questions he holds dear: What is seeing? What is the world around us all about? He says he has always been ‘fascinated by the grandeur and structure of the universe, and by understanding how everything functions and interacts. And by how man has been able to find mathematical representations of how nature functions. Is it in the spirit of man to find representations of nature – or are mathematics an integral part of nature ? These are the ideas behind my desire to create air-born choreographies. My work’s technical complexity may be considered as representing the complexity of the universe – with the eye of the viewer like someone observing and pondering the universe.’

With Elias Crespin, artistic intuition and scientific rigor overlap, provoking an intense perceptive experience that nothing can distract from. Direct contact with Crespin’s work sees the viewer borne away by the slow, silent dance of electrokinetic mobiles whose incessant variations, exploring the imaginary dimension of our relationship with the cosmos, herald a truly poetic approach to space. 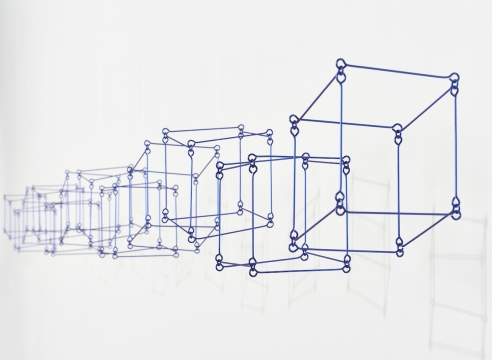