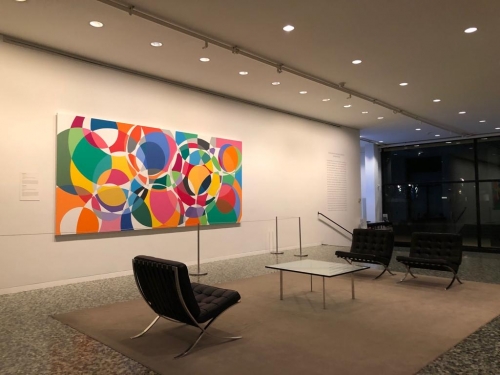 Graciela Hasper's painting Untitled, 2011 is currently on view at the Caroline Wiess Law Building at the Museum of FIne Arts, Houston.

During a trip to Europe in 1987, Graciela Hasper realized for the first time that she wanted to make art. She returned to Argentina and began her studies with other artists: between 1987 and 1991, she studied with Diana Aisenberg, while also pursuing independent studies of philosophy and art history. In part because of Argentina's dictatorship, Hasper never attended art school.

In 1993, Hasper participated in an exhibition curated by Jorge Gumier Maier, Nicolás Guagnini, and Pablo Siquier, held at the Centro Cultural Rojas de Buenos Aires. Titled Crimen y Ornamento, the exhibition subsequently was shown in New York, curated by Carlos Basualdo. This was one of the first exhibitions to explicitly link the generation of 1990s artists in Buenos Aires with mid-century abstraction, and the artists included became known as the Rojas group. “In Argentina, abstraction was repressed because it did not ‘explain’ national values. It had no value. So I adopted something that had no value and tried to make it valuable, an act of resistance. My work reflects the way a younger artist can respond to Madí, to the abstraction of the 1940s and 1950s,” Hasper says in a later interview with Lilly Wei.

Since the 1990s, Hasper’s painting aesthetic has been clean and direct, marked by sharp orthogonal lines and bright color. In 2000, she completed her first residency in the United States, at Apex Art in New York with a Fulbright / FNA Grant. In 2002, she participated in the Chinati Foundation residency. Her most recent work has expanded to a larger scale, even encompassing architectural interventions. “I’m trying to expand the boundaries of painting in order to include the body,” she notes. For her 2013 project for the city of Buenos Aires at Museo de Arte Moderno de Buenos Aires (MAMBA), Nudo de Autopista, Hasper designed a painted mural for 100 columns of several intersecting highways in Buenos Aires. The resulting color scheme marked the different flows of traffic on the streets: “you experience the materiality of the work, and you’re surrounded by it.”

Hasper designed a large-scale mural, her most ambitious work to date, for Miami’s Faena Forum, designed by Rem Koolhaas of OMA. This site-specific wallpaper, Untitled, covers a four-story wall in bright color and geometric pattern. The same year, Hasper created Notas de Luz, a three-dimensional light installation in Buenos Aires, comprised of a screen in the ceiling of a 328-foot high public square. The piece changes with the passing of pedestrians, playing pre-recorded sequences and the music played in the Usina del Arte.