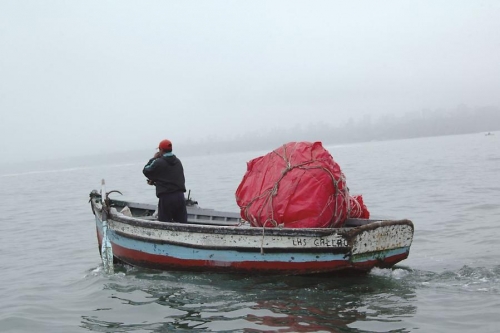 The Contemporary Arts Museum Houston is pleased to present video and sculpture by Mexico City-based artist Melanie Smith. CAMH's exhibition focuses on three video-based installation works: Xilitla: Dismantled 1; Bulto: Fragments; and Elevator (2010, 2011, and 2012, respectively). Working in cinematic installations since the late 1990s, Smith, as an English-born artist living in Mexico, initially took an almost ethnographic approach to the eccentricities of the sprawling, chaotic mass of her adopted home city, considering as worthy of critical examination the markets full of plastic and the shear physical expanse of the massive metropolis. Since 2010 her works have grown less analytical and increasingly poetic, sensual, and surreal.

Xilitla is named after the town in Northern Mexico where the eccentric English artist, poet, and patron of the surrealist art movement, Edward James, built the architectural folly called Las Pozas. Now half returned to the jungle, its sculptures recall an expatriate Englishman's response to the indigenous culture of the Americas through the lens of the surrealist's subconscious interpretations of it. A tall, vertical projection filmed by the artist shows a magical world and simultaneously its more quotidian underbelly--workers maintaining this rapidly decaying artwork. Yet even in that, Smith locates a deconstructed magic. Manipulating large mirrors that appear throughout the film, Smith doubles and dissects what is left of James' life's work creating a mesmerizing effect.

Bulto: Fragments was filmed in Lima, Peru, and in it we see a large, ungainly mass being carried, dragged, abandoned, and reclaimed throughout the urban center of the city as well as nearby archaeological sites, without anyone questioning what is hidden inside the bundled object. At CAMH, the video will be presented in its dissected form in which fragments appear on multiple small monitors throughout the public areas of the Museum, including the bathrooms and elevator. The short and darkly humorous Elevator presents episodic tableaux that appear and vanish as an elevator opens on different floors, becoming increasingly comic and surreal. This work is presented with associated objects that are derived from the increasingly wild scenes.

Although considered one of the best known Mexican artists working today--her standing among her fellow artists made clear by her representation of her adopted country with a solo pavilion exhibition at the 2011 Venice Biennale--Smith enjoys the ex-patriot's ability to perceive the culture that fuels her work through her critical, bifurcated gaze. Through her finely tuned aesthetic choices, she seduces viewers visually, letting those of us for whom Mexican culture is less familiar gain a respect and appreciation of its mysteries. This exhibition will speak directly to both the reality and dream of Mexico and showcase an artist of rare analytic, aesthetic, and poetic sensibility.


Melanie Smith is presented in CAMH's Zilkha Gallery and is curated by Bill Arning, Director. In Houston, an exhibition of new work by Smith, including paintings and a video, is also on view at Sicardi Gallery, February 27-April 19, 2014.

Melanie Smith was born in Poole, England in 1965. She received her Bachelor of Arts from the University of Reading in 1984. Since 1989 she has lived and worked in Mexico City, an experience that has enormously influenced her works ever since. Her work has been exhibited at numerous institutions, both nationally and internationally, including: P. S. 1, New York; MoMA, New York; UCLA Hammer Museum, Los Angeles; ICA, Boston; Tate Liverpool; Tate Modern, London; South London Gallery, London; Lima Art Museum; Tamayo Museum, Contemporary Art University Museum and El Eco Experimental Museum, Mexico City; and Monterrey Museum, among others. Her individual exhibitions include: Art Now Lightbox: Melanie Smith and Rafael Ortega, Tate Britain (2012); Red Square Impossible Pink, Mexican Pavilion, 54th International Venice Biennale (2011); Parres Trilogy, in collaboration with Rafael Ortega, Miami Art Museum (2008); and Cerca Series - Melanie Smith, Museum of Contemporary Art San Diego (2004). Smith's retrospective exhibition, Spiral City and Other Vicarious Pleasures, traveled from the University Museum of Science and the Arts (MUCA) in Mexico City (2006) to The Lab in Denver (2008) and MIT List in Boston (2009). She holds a grant from the National System of Art Creators of the FONCA (Mexico).

Melanie Smith is accompanied by a bound, illustrated catalogue including an essay by the exhibition's curator, Bill Arning, a checklist of works in the exhibition, and biographic and bibliographic citations. Available April 2014.

Perspectives catalogues are made possible by a grant from The Brown Foundation, Inc.

All events are free and open to the public and take place at the Contemporary Arts Museum Houston unless otherwise noted. For complete listings and current information, please check www.camh.org.

Join us for the opening reception of Melanie Smith. Reception with cash bar.

Join artist Melanie Smith for a discussion about her work and influences.

Adriana Zavala, Ph.D. is an Associate Professor at Tufts University where she specializes in Modern and Contemporary Latin American Art, the Art of Mexico, and Gender and Women's Studies. Zavala is one of the leading lights in the reevaluation of Latin American art of the last decade and will be speaking about the history of Latin American film to provide context to Melanie Smith's videos.