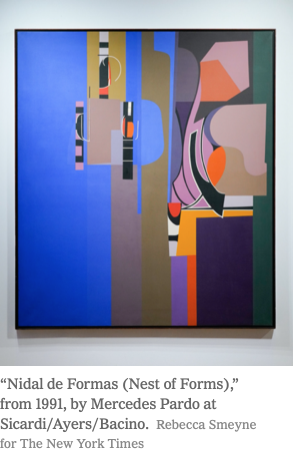 By Martha Schwendener for The New York Times

Trust me, even if you’ve been looking at art for a long, long time (or even longer than that), you will see work at the Art Show at the Park Avenue Armory you have not seen before, by artists you may never have heard of. This is not because the Art Show, organized by the Art Dealers Association of America to benefit Henry Street Settlement, is dedicated to showing the young and hip. Quite the opposite, ADAA represents blue-chip galleries that show high-quality work.

But it has a terrific roundup of art by lesser-known artists, many dead or left out of art history for all the ordinary reasons (gender, geographical location or the idiosyncrasies of their work at a given moment). And despite the density, the fair is very manageable compared with other mega-fairs in New York.

Other strains running through the 72 exhibitors at ADAA this year, the fair’s 32nd edition, are a focus on geometric abstraction and craft and a high percentage of female artists — 19 exhibitions are dedicated to them. With an enormous backlog of women, artists of color and people working in unusual media, fairs like this one are yet another place to play catch-up. Below are some highlights, divided into categories with lots of slippage and overlap.

Just inside the fair’s entrance, three booths are showing geometrically abstract work — a good indication of its current popularity. The Houston gallery Sicardi | Ayers | Bacino (A1) has canvases by Mercedes Pardo (1921-2005), a Venezuelan painter whose dark, moody colors — she mixed her own pigments — and off-kilter geometric compositions set her apart from painters working with more reductive shapes and forms. Sean Kelly Gallery(D2) has deep, chalky blue paintings by the London artist Idris Khan. The paintings look completely abstract but they are built up in places with layers of text. Across the aisle at Petzel Gallery (B1) Walead Beshty’s colorful photograms are reflected in mirrored panels on the floor, which will be sold after they are sufficiently cracked and weathered. The panels echo an earlier project by Mr. Beshty in which he “created” shattered sculptures by shipping glass rectangles in FedEx boxes. Deeper into the fair, Philadelphia’s Locks Gallery (A10) is spotlighting Edna Andrade(1917-2008), a painter who worked in the Op Art vein (although most painters eschewed that term). A few of her electric-hued, radiating compositions are mounted on wallpaper that she designed, alongside a ceramic chess set she made, showing her range beyond painting into craft and design.

The interest in handmade craft and global folk traditions continues in a variety of forms here. Jordan Nassar takes a conceptual approach at James Cohan (C5), where he has an antique Palestinian dress from the Beersheba area, from around 1900, with traditional embroidery in a display case. Mr. Nassar then paints these (or similar) patterns onto canvases, creating spare but rich geometric pictures. At San Francisco’s Anglim Gilbert Gallery(D28), craft assumes the form of miniature houses made with tiny glass bottles and wooden armatures by Mildred Howard, and Jacob Hashimoto’s wall works and hanging installations made with rice paper, bamboo and resin, inspired by Japanese kite-making techniques. Nina Chanel Abney is best known as a painter, but she takes a craftlike approach in her collages at Pace Prints (D11), which are created with colored paper glued onto panels. Some of the best contemporary works in the fair, the compositions here address African-American histories, and include American flags that appear ironic rather than celebratory in intent. Nearby at P.P.O.W (C9), the Los Angeles artist Ramiro Gomez’s cardboard cutouts of human figures doing physical jobs highlight what he thinks of as “invisible labor.” They bring to light who is cleaning the bathrooms and serving food at the fair, rather than buying and selling (or making) the art.

I’ve already mentioned a number of exceptional women at the fair, but here are a few more. Venus Over Manhattan (D10) has dedicated its booth to the art dealer Phyllis Kind, who opened her first gallery in Chicago in 1967 and was a trailblazer and mentor for many other art dealers. A painting by William N. Copleyparadoxically, perhaps, has a female nude with graffiti playfully applied to her flesh, and there is a cartoon-inspired felt-trip drawing here by Ray Yoshida, who inspired many Chicago Imagist painters. In a more feminist vein, Susan Inglett Gallery (D18) is showing the work of Beverly Semmes, which includes pornographic images printed on canvas and painted over, in sections, transforming the original images into something more abstract and mysterious. Michael Werner (C3) is exhibiting the wonderfully banal neo-Pop paintings and some raw craft-like assemblages by the Berlin artist Raphaela Simon, and Casey Kaplan (B5) has canvases by Judith Eisler based on film and video images of women including Serena Williams and the actress Anna Karina. Alice Neel is hardly unknown, but Cheim & Read’s (D13) mini-retrospective of her work bears mentioning, since it includes an unrecognizable, Edward Hopperesque cityscape from the 1930s, as well as a handful of her beautifully odd and unsettling portraits.

Surrealism started in the 1920s as a notorious boys’ club, but later generations of women working in this dreamy idiom stole the show. This is particularly true of Leonora Carrington and Remedios Varo, best friends living as expatriates in Mexico City in the 1950s whose works are on view at Gallery Wendi Norris (D29). Alongside gorgeously weird paintings of women, birds and cats — as well as mythical and imaginary creatures — is a Varo sculpture made from fish, chicken and turkey bones after a dinner with artists. An accompanying scroll with text proposes a clever alternative evolutionary route for homo sapiens, with an umbrella appearing at an archaeological dig, disrupting Darwin’s narrative. Jonathan Boos (A4) has a slightly tamer show titled “Psychological Realism” which includes paintings from the 1940s and ’50s by the American artists George Tooker and Alton Pickens that would not look out of place in a contemporary hipster-oriented gallery on the Lower East Side. Hirschl & Adler Galleries (B4) has a roundup of radical artists — among them Honoré Sharrer, a wonderfully talented painter who was a communist who had to move to Canada during the Red Scare and who made paintings that look like American Gothic stories come to life. Finally, Galerie Lelong & Co. (A8) has a standout presentation of paintings by Ficre Ghebreyesus (1962-2012), an artist born in Eritrea who was married to the poet Elizabeth Alexander. Mixing sources from jazz to Islamic architecture to Coptic Christian iconography and Eritrean folk art, Mr. Ghebreyesus processed everything he saw as a refugee and a global citizen into a kind of ecstatic surrealism. This is the first solo exhibition of his work in New York and the first time I’d seen it. He died of a heart attack a few days after his 50th birthday, leaving behind 882 paintings, a handful of which are on view here.

Read the Full Story via nytimes.com