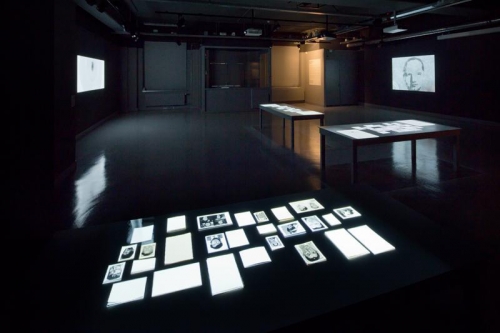 Sicardi Gallery is delighted to announce that 2013 Prince Claus Laureate Óscar Muñoz will have a solo exhibition, curated by José Roca, at the Prince Claus Fund Gallery. The exhibition opens on April 17, with a reception from 5:30 to 7:30 pm. The artist will be present, and will have a conversation with curator Gabriela Salgado.

Oscar Muñoz is known for his poetic artworks that employ non-conventional photographic, mechanical printing techniques and video. By working with transient mediums such as human breath, water, dust and methacrylate, Muñoz's artworks question the capacity of the image to retain memory and interrogate the fragile nature of perception, identity and memory.

“Muñoz's (self) portraits illustrate the powerful role of images in our social process of remembering, and of forgetting.”  - Curator and Prince Claus Awards Committee Member José Roca

Óscar Muñoz is a prolific visual artist living and working in Cali Colombia. His works are included in such collections as the Tate Modern (London) and the MoMA (New York).  He is also founder of the cultural centre and artist residency programme lugar a dudas in Cali. Muñoz received the 2013 Prince Claus Award for “his highly original, profound and poetic artworks on the transitory nature of human existence, memory and history; for his dedicated commitment to heightening public awareness of both the power and fragility of the image in a context of violence and disappearance; for expanding the boundaries of the visual arts in his pursuit of accessible and deceptively simple ways to convey complex ideas; and for his generosity as a public intellectual, influencing younger generations and supporting the development of contemporary culture.”

José Roca, a Colombian curator working from Bogotá, is the Estrellita B. Brodsky Curator of Latin American Art at Tate Modern, London, and Artistic Director of FLORA ars+natura in Bogotá.

Gabriela Salgado is an Argentine-born curator based in London, UK, who has worked for the Collection of Latin American Art at Essex University and Tate Modern, and is currently an independent curator.

portrait(self)portrait will be on view in the Prince Claus Fund Gallery through 1 August 2014. Muñoz's works will also be exhibited at Jeu de Paume in Paris 3 June through 21 September 2014.