Praised for his “warm lyricism and rich passion,” Venezuelan violinist Rubén Rengel is quickly gaining recognition as a remarkably gifted concert violinist, continuously captivating audiences with a lush, singing tone, and charismatic virtuosity. Mr. Rengel was the Winner of the 2018 Sphinx Competition. Concerto engagements this season include performances with the Houston, Vermont, and Signature Symphonies. He has previously appeared with the Venezuela, Firelands, and CIM Symphony Orchestras. Mr. Rengel is an avid chamber musician, appearing in collaborations with Joseph Silverstein, Joel Krosnick, Pamela Frank, Timothy Eddy, and Gilbert Kalish. He is currently pursuing a Master’s degree at Rice University’s Shepherd School of Music, as a student of Paul Kantor. Previously, he was a student of Jaime Laredo in Cleveland, and Iván Pérez in Caracas. He also enjoys performing other genres such as Venezuelan folk music and Jazz. Mr. Rengel plays on a 1908 Stefano Scarampella violin on loan from a private collection.

Brenda Rengel is a Venezuelan violinist characterized by her versatility and mixed musical influences. She developed her talents growing up in a rich environment with plurality of genres, both in classical music and popular styles. Ms. Rengel is a member of the Venezuela Symphony Orchestra since 2012. She studied at the Emil Friedman Conservatory and School with Alfonso López and Iván Pérez in Caracas. She has collaborated with nationally and internationally recognized artists such as Serenata Guayanesa, Cecilia Todd, Gualberto Ibarreto, Aquiles Báez, Cayito Aponte, Francisco Pacheco, and Ensamble Gurrufío.

Maestro Rengel is a renowned figure in the Venezuelan music world. He began his studies with Maestro Beto Valderrama Patiño in Margarita Island. Throughout his career he has shared the stage with distinguished Venezuelan world-class artists such as Serenata Guayanesa, Cecilia Todd, Gualberto Ibarreto, Simón Díaz, among others. His ample performing career has taken him on tours across North, Central and South America, Europe, and Asia. As a multi-instrumentalist, he specializes in instruments in the plucked strings family: Mandolin, Bandola, Bass, Guitar and Cuatro. Maestro Rengel maintains the goal of perpetuating the culture of his country, within Venezuela and around the world. His musical heritage is reflected on his children, who with great passion and quality perform both classical and Venezuelan music.

Color evolved into the main focus in Pardo’s explorations, making visible not only a plethora of its inherent perceptual, retinal qualities, but how it persists in the mind’s eye, evoking sensations linked to visual and musical cultural memory. In fact, in her radically simple compositions, Pardo creates nuances and dynamic tensions based on color combinations that resonate with musical harmony, dissonance, atonality.

In a filmed interview, demonstrates her collage process as she combines scraps of colored paper, separating them in plastic bags and then using them as her color palette. Their chance encounter generates unusual tonal schemes applied to her surprisingly playful juxtapositions of simple geometric forms a process Pardo calls “afinación” –fine tuning–, as if speaking of a musical instrument.

Far more subliminal, is color’s aural dimension. Malevich's remark, “a painting must be heard” comes to mind when Pardo accentuates rhythm and duration as an intrinsic quality of her color infused forms. Exposed as she was to great compositions of concrete music, her arrangements have all to do with duration when she uses intense color fields, where complementary atmospheric after tones suggest distant voices, while rhythmic structure is punctuated by dissonant, restrained slivers of color. In Pardo, one could easily imagine a painting turned into a musical score, orchestrating different instruments, counterpointing durational tones, intensities, coloratura in space and time.

If there is a patent distinction between Pardo’s geometric hard edge painting and her American and European counterparts such as Ellsworth Kelly, Joseph Albers, Al Reinhart, it is precisely based on an emotional, experiential or, –what some critics have called– a "lyrical" component in her work: one that escapes definition. 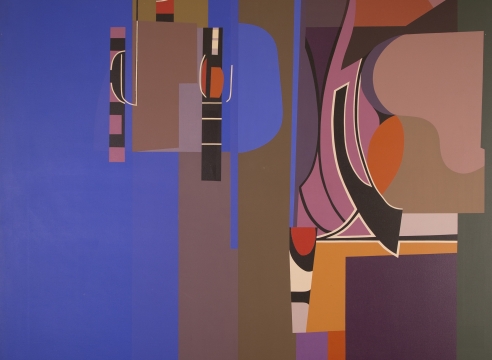