A pioneer of kinetic art in Brazil, Abraham Palatnik’s investigations into technology, mobility, and light led to a groundbreaking understanding of visual phenomena. In 1932, Palatnik moved to Tel Aviv where he studied painting, drawing, and art history at the Municipal Art Institute.  It was during this time that he took a specialized course in Internal Combustion Engines at the Montefiore School.

In 1947, Palatnik returned to Rio de Janeiro.  During this time he began to visit the Dom Pedro II Psychiatric Hospital, coordinated by Dr. Nise da Silveira.  Upon seeing the artworks by schizophrenic patients who presented an exceptional production, even without previous art training, Palatnik recognized his art impotent and decided to move in a new direction.  He therefore gave up his work with brushes and started to engage in a freer relation between form and color. His research resulted in the creation of his first Kinechromatic Device, a motorized light sculpture that cast a play of light and shadow into space.

Palatnik’s Kinechromatic Device, Objeto Cinecromático: Azul e Roxo em Primeiro, was awarded honorable mention at the 1st São Paulo Bienal in 1951. Since 1951, Abraham Palatnik has participated in eight editions of the São Paulo Biennale.  In  1964, he participated in the 32 Venice Biennale.  In the 1950s, in addition to making kinetic objects, mobiles, and drawings, Palatnik shifted his focus to creating cardboard and wood compositions.

His practice which spans over sixty years questions time, movement, and the relationship between man and nature.  For Palatnik, the artist’s role is to discipline the perception of chaos. His most recent exhibitions include “A Reinvenção da Pintura” (The Reinvention of Painting, 2015), at the Museu Iberê Camargo in Porto Alegre, a survey of sixty-five years of work. Previous iterations were shown in Museu Oscar Niemeyer, Curitiba (2014), Museu de Arte Moderna de São Paulo - MAM-SP, (2014), and the Centro Cultural Banco do Brasil, São Paulo (2013). 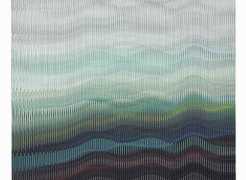