Sicardi Gallery proudly announces its representation of Venezuelan artist Magdalena Fernandez with a solo exhibition of new work. Magdalena Fernández: Flexible Structures opens with a reception on Thursday, January 12, from 6-8 pm. The artist will be present.

Known internationally for her interactive installations and poetic sculptures and videos, Fernández opens up reductive forms of modernism to elements typically beyond its parameters—namely nature and the body. Alluding to the forms of mid-century artists such as Piet Mondrian and Sol Lewitt as well as her Venezuelan predecessors Gego, Jesús Soto and Alejandro Otero, she opens their hard lines and strict geometries to movement, chance, and interaction. Her work therefore critiques a modern notion of development as an agenda-driven delineation between civilization and wilderness, organization and chance, purity and contamination.

Fernández’s exhibition at Sicardi includes drawings, sculptures, videos, and a monumental installation that, together with the Museum of Fine Arts Houston’s concurrent installation of 2iPM009 at Buffalo Bayou Park, presents a comprehensive collection of the Venezuelan artist’s work over the last ten years. These combined works explore ways that ephemeral elements of water, wind, and light effect social and political patterns across the globe. At Sicardi, she will debut a series of works constructed from steal, rubber and elastic that flex and shift in the gallery through audience interaction.

Trained as a mathematician, and later as a graphic designer under the mentorship of A.G. Fronzoni, the celebrated Italian minimalist designer, Magdalena Fernández began her artistic production in Italy in the early 1990s. From her early work in Italy as a graphic designer, she developed a rigorous familiarity with line and structure. She began making stainless steel sculptures in the mid-1990s, setting them into the ground and inviting viewers to activate them. Her work explores the tenets of minimalism and geometric constructivism while, at the same time, investigating the mutable and flexible nature of physical phenomena. Her work has been the subject of numerous solo exhibitions in Europe, Latin America and the United States. Fernández has also participated in important group exhibitions, including Contingent Beauty at the MFAH, Beyond the Supersquare at the Bronx Museum of Arts, and Drawing Papers at the Drawing Center in New York; and her work is represented in major private and museum collections around the world, including the Pérez Art Museum in Miami, the Patricia Phelps de Cisneros Collection in New York, the Museum of Contemporary Art in Los Angeles, the Museum of Fine Arts Houston in the US, and the Museum of Modern Art in Łódź, Poland. 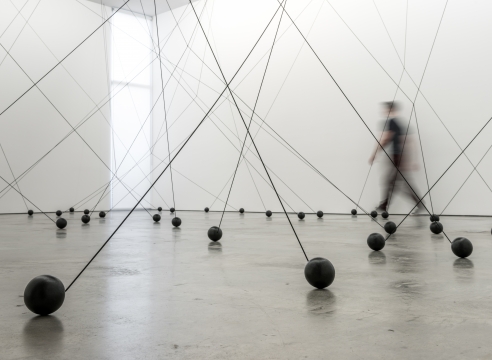