Sicardi | Ayers | Bacino proudly presents our third solo exhibition for Argentine artist Miguel Angel Ríos. The show includes a selection of pieces from his Mapa series which he started in the 1990s, following the 500th anniversary of the arrival of Christopher Colombus to the Caribbean Islands.

Miguel Angel Ríos studied at the Academy of Fine Arts in Buenos Aires before moving to New York in the 1970s to escape the military dictatorship in Argentina. He subsequently relocated to Mexico and now divides his time between the U.S. and Mexico. In his work, Ríos pairs a rigorous conceptual approach with a meticulously constructed and often handmade aesthetic. Since the 1970s, he has created art addressing the concept of the "Latin American," using this idea as both an artistic strategy and a political problem. In the 1990s, he began creating this series of maps, which he carefully folded and pleated by hand. Marking the 500th anniversary of the "discovery" of the Americas, the maps indicate long histories of power and colonial experience, and they reference traditional indigenous arts in the Americas, including the Andean quipu. With text written by curator Martina Sabbadini, Torn to Shreds "draw[s] our attention to the political act of map drawing, through a series of geometric gestures." Miguel Angel Ríos "modifies maps from the Colonial period into new complex compositions through the acts of amplifying, cutting, folding, pleating and pasting. He literally shreds enlarged photographic facsimiles of Colonial documents to question and resist the arbitrariness of frontiers."

The Museum of Fine Arts, Houston is featuring a projection of Miguel Angel Ríos's video On the Edge on January 29, and it will be on view through February 24, 2019. View more about the video projection at http://www.mfah.org/exhibitions/miguel-angel-rios-edge 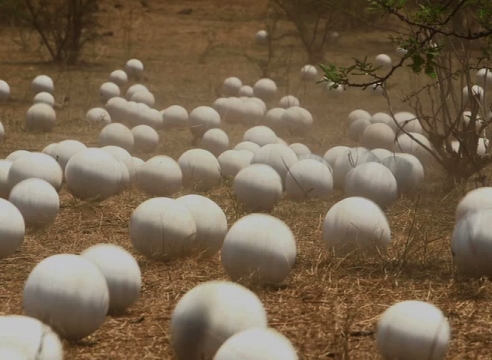