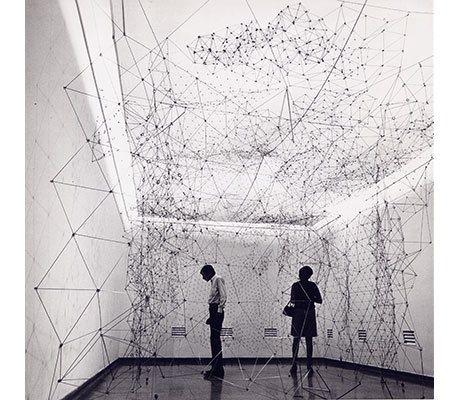 Sicardi Gallery is pleased to announce the opening of the exhibition Gego: Line as Object at The Henry Moore Institute in Leeds, England.

Known as Gego, Gertrud Goldschmidt (1912–1994) is one of Latin America's best-known woman artists and became a role model for an entire generation of artists. From 1932 to 1938, Gego studied architecture with Paul Bonatz at the Technical University in Stuttgart. In 1939, as the situation in Germany became increasingly threatening for her due to her Jewish heritage, she immigrated to Caracas. There, after briefly working as an architect and furniture designer, she began making art in 1953. The Kunstmuseum Stuttgart is now devoting a large special exhibition to Gego, one of the most important woman artists in Latin America.

Gego's most important expressive medium is the line. Over the course of four decades she researched the expansion of the line into an object, using the line to create planes, volumes, and elongated mesh structures. She saw the line "as [an] object to play with," as she herself remarked. For Gego, the lines, their relationship to one another, as well as the resulting spaces in between, all carried the same weight. She investigated the line's potential in planar compositions as well as in three dimensions and always produced drawings parallel to her sculptural works.

Gego's exploration of the line began with her drawings, ink drawings, and lithographs of the 1960s. In these works lines are woven into planes. In turn, through interventions and interferences, empty spaces and interstices open up. In contrast to the functional use of lines in architecture, with which horizontal and vertical directions are indicated, Gego used lines in a process-oriented progression to construct open, flowing spaces that have neither a center, nor a hierarchy, nor edges. As a trained architect she used her knowledge about geometric shapes in developing her sculptural structures.

In the mid-1970s Gego produced her "Esferas" (Spheres) followed by the "Troncos" (Trunks). Whereas the first group of works is based on an intense exploration of the geometry of polygons, which she "unfolded" to create infinite spatial arrangements, the shape of the "Troncos" suggests natural, organically developed structures.

Beginning in 1987, Gego's increasingly liberated handling of the line and masterful technical abilities crystallized in the "Bichitos" (Small Critters), in which she incorporated all sorts of materials and everyday relics. In the final group of works, the "Tejeduras" (Weaving Mills, beginning 1988), she interwove strips of cut-up photos and magazine pages, as well as cigarette papers, into microscopically fine meshes. In 1976 the synthesis of Gego's insights into the line and space began to manifest in her "Dibujos sin Papel"(Drawings without Paper). Here Gego virtuously fashioned materials such as wire and leather sleeves into seemingly weightless, lattice-like objects that she hung in front of a wall, their shadows projecting drawings on to the wall's surface.

Besides her artistic activity Gego also produced major works for public spaces in Caracas and from 1964 to 1977 taught, among other things, as a professor for modeling and three-dimensional form at the Instituto de Diseño, Fundación Neumann in Caracas, where Luisa Richter was among her colleagues. Concurrent with the exhibition Gego. Line as Object works by Luisa Richter are being featured on the third floor of the Cube.

Featuring over one hundred drawings, graphic works, and three-dimensional pieces, the exhibition presents all of the artist's major work phases. International loans are being contributed by the Museum of Fine Arts, Houston; the MACBA, Museu d'Art Contempororani de Barcelona; private collections; and from the posthumously established Fundación Gego in Caracas.

The exhibition was organized collaboratively by the Hamburger Kunsthalle, the Kunstmuseum Stuttgart, and the Henry Moore Institute in Leeds, England.