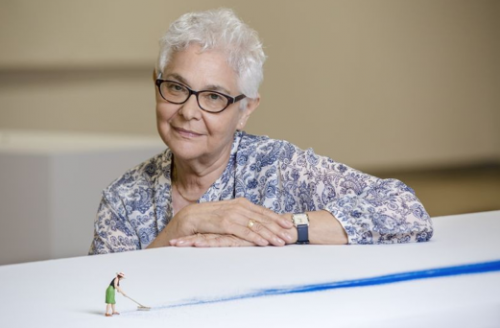 Other Situations is a non-linear survey of Porter’s work from 1973 to 2018, which explores the conflicting boundaries between reality and fiction, and the ways in which images are circulated and consumed. Organized by SCAD Museum of Art and curated by Humberto Moro, SCAD Curator of Exhibitions, this is the artist’s first museum solo show in New York City in more than 25 years. The exhibition highlights the fundamental distinction that Porter creates between the notions of “narrative” and “situation” in contrast to the structures implicit in most stories that suggest a relationship with time, and in which the artist is not interested. In her work, the past and future of an action becomes irrelevant in light of the urgency and absurdity of the problems faced by the figures portrayed. Sometimes paired in conversation or arranged in larger groups, Porter’s characters — a pantheon of cultural figures such as Elvis Presley, Che Guevara, Jesus, Mickey Mouse and Benito Juárez — evokes questions about representation, image dissemination and public life, and are particularly relevant in present times, when the fields of politics, spectacle and celebrity culture collide and merge. Among the significant pieces included in the exhibition are Porter’s 1970s photographs alluding to space and the body, and more recent works like the “Forced Labor” series, in which the artist utilizes miniature figurines to make a statement about reality, labor and self-awareness.

Along with the exhibition, this fall, Porter will present a new theater performance, a medium that she has explored in recent years in close collaboration with artist Ana Tiscornia. Specially commissioned for the occasion, the performance will be presented at the renowned performance art space, The Kitchen. In addition, El Museo del Barrio will produce a publication focusing on artist Liliana Porter’s theatrical output – the first of its kind– in an effort to further disseminate the artist’s work and legacy.

Born in Argentina in 1941, Liliana Porter, originally educated in printmaking — a discipline that deeply influenced her practice — moved to New York in 1964, where she cofounded the New York Graphic Workshop with artists Luis Camnitzer and José Guillermo Castillo. Since then, Porter has worked in a variety of media including painting, drawing, printmaking, photography, assemblages, video, installation and, more recently, theater. Porter’s art has been exhibited in more than 35 countries in over 450 group shows, and is a part of public and private collections including El Museo del Barrio. Her work has been reviewed in Artforum, Art in America, and Sculpture Magazine, among other publications. In 2013, the Fundación Patricia Phelps de Cisneros published the book Liliana Porter in Conversation with Inés Katzenstein as part of the Conversaciones/Conversations series. Galleries in Europe, Latin America and the United States represent the artist.

artnet - 35 Stunning Museum Shows to See in New York Over the Holidays, From Renaissance Jewel Boxes to Heart-Thumping Surveys