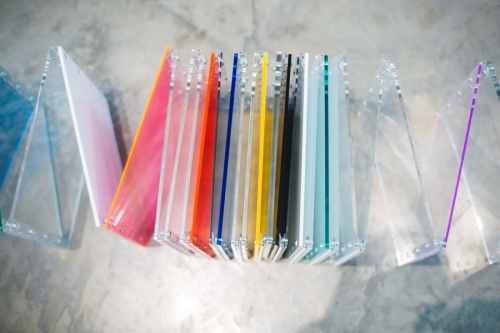 Embracing the instability of perspective and form, New York artist Marta Chilindron (b. 1951, Buenos Aires) creates manipulable sculptures in transparent and colored acrylics.  Adapted from such basic geometric shapes as spheres, cubes, and pyramids, her artworks conceal their identity as complex, kinetic constructions.  Constructed from multiple panels connected by hinges, Chilindron’s sculptures are charged with transformative potential that, when activated by the viewer, cause the works to expand//fold//collapse.

An heir to international constructivism, Chilindron's artworks recall the influence of such artists as Naum Gabo, Lygia Clark, and Donald Judd.  However, to this tradition Chilindron adds her own investigations based on her interest in the dynamism and mutability of life.  Controlled by the viewer yet mediated by their constructed forms, her artworks transform shape, shift from the second to the third dimension, and extend and contract into space.  Magnified by the chromatic interplay caused by the effects of light, these changes underlie the core of her artistic practice.

Providing a dramatic contrast to the ornate interior of the Duke House, seven works by the artist will be on view in the lobby and vestibule of the Institute of Fine Arts  for the Fall 2014 Great Hall Exhibition.  Focusing on Chilindron’s engagement with idealized geometric forms, these works, executed between 2006 and 2014, will show the diversity of the artist’s practice, ranging from table-top objects such as the curvilinear Helix (2011) to her large-scale Cube 48 Orange (2014).  This latter work represents Chilindron’s expansion into immersive sculptural environments, and is being shown in New York for the first time since its debut in the Encounters exhibition at Art Basel Hong Kong, held in spring 2014.

The James B. Duke House