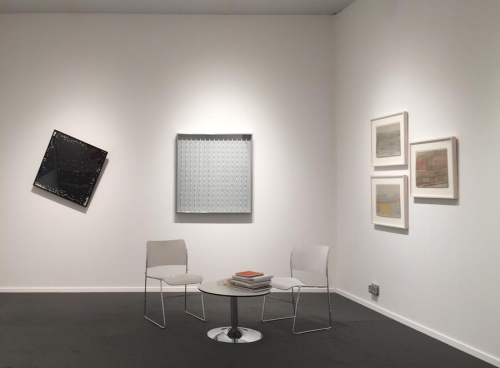 For the 2016 Frieze Masters (Spotlight), Sicardi Gallery is pleased to present an exhibition of historical work by Brazilian sculptor, printmaker, and kinetic artist Sérvulo Esmeraldo. Sérvulo Esmeraldo, born in Crato, Brazil in 1929.  A student of architecture and engineering, mathematics, geometry, and physics, he moved to Paris in 1957 and joined a dynamic expatriate community of artists exploring movement, public engagement, optics, and technology.  Join us for the opening ofFrieze Masters at Regent's Park in London on Thursday, October 6, 2016 at 11am.

Sicardi Gallery's Frieze Masters exhibition pairs Esmeraldo’s Excitables with a selection of drawings; the works share the artist’s approach to an interactive kineticism. Stored for almost 20 years in the Paris studio of artist Julio Le Parc, the Excitables have been rarely seen. They consist of containers which enclose small pieces of paper, fabric, and other materials behind a plastic sheet. When the viewer rubs the sheet with their hand, the resulting static electricity enlivens the objects within, making them jump and wave. Excitables add a sensual quality to the propositions being made by kinetic artists such as Carlos Cruz-Diez and Jesús Rafael Soto at the time, and are in direct conversation with ideas being explored by Lygia Clark and Takis in the 1960s and 1970s.

Spotlight, founded in 2012, is a curated section in Frieze Masters that surveys under recognized or rarely exhibited artwork created by key figures in the 20th-century avant-garde.  Toby Kamps, Curator of Modern and Contemporary Art at the Menil Collection, is the curator for Spotlight 2016.